The Church of the Deposition of the Robe was painted in 1644 on order of Patriarch Joseph by icon painters Sidor Pospeyev, Ivan Borisov and Semyon Abramov. The whole church was painted less than in three months. There is evidence that the church was first painted before 1605, and the icon painters followed that system of painting. It might have been first painted just after it was built, and the murals in the main date back to the end of the 15th century.

The arrangement of the depictions is strictly canonical. The image of the Pantocrator is placed in the dome, the images of the Old Testament prophets are in the upper tier of the dome drum, the evangelists – in the lower one. Vaults and lunettes are decorated with the scenes from the Gospel story of Christ, beginning from the Nativity till the Ascension, as well as the Holy Trinity, included in this Cycle (part of the composition is placed behind the iconostasis).

West pillars bear the images of Russian Princes and Moscow Metropolitans, who have been canonized. The images of church hierarchs are depicted on east pillars, hidden behind the iconostasis, above the arches, connecting the pillars from the east side; and they are depicted in the arches as well.

The Church of the Deposition of the Virgin’s Robe is dedicated to the Feast of the Theotokos, thus the theme of most of the frescoes is the ‘laudation of the Virgin Mary’. These paintings, executed in the fresco technique (i.e. executed upon freshly-laid or wet lime plaster) with the use of egg tempera, occupy four tiers. The Life of the Virgin Cycle is arranged in two upper tiers, while the Akathist Hymn to the Theotokos is illustrated in two bottom tiers. 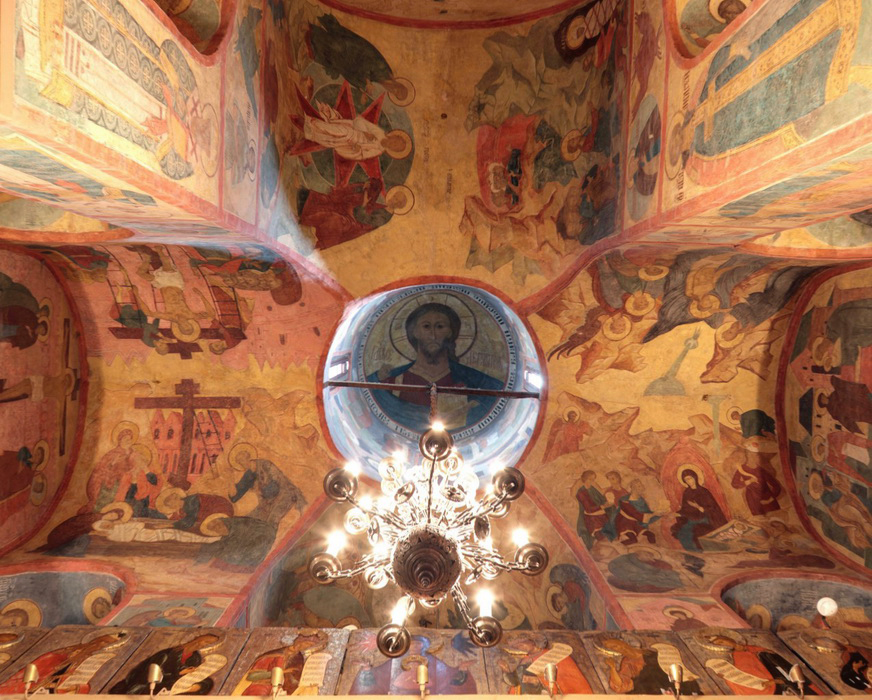 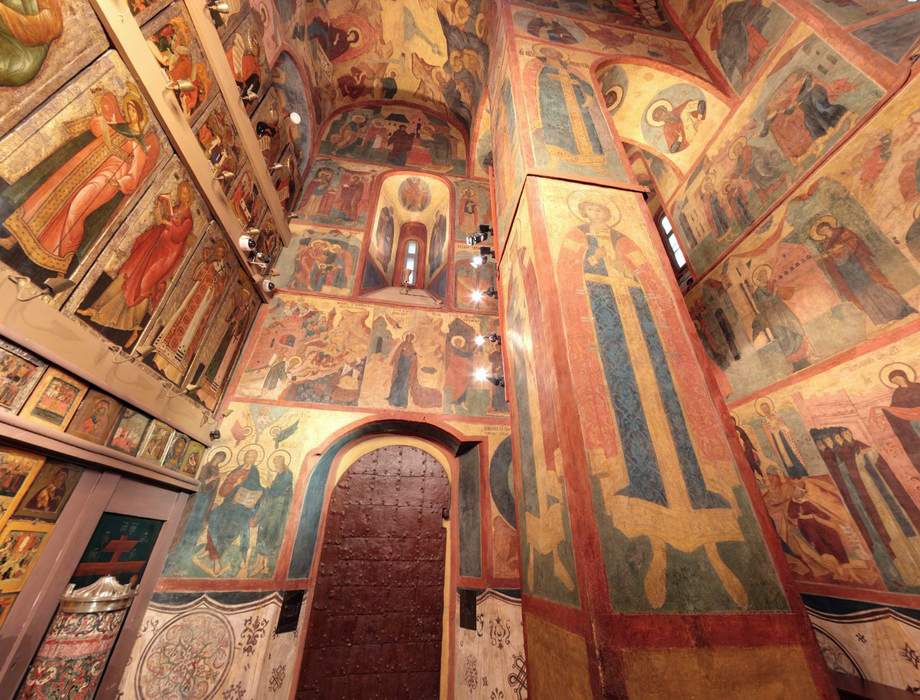 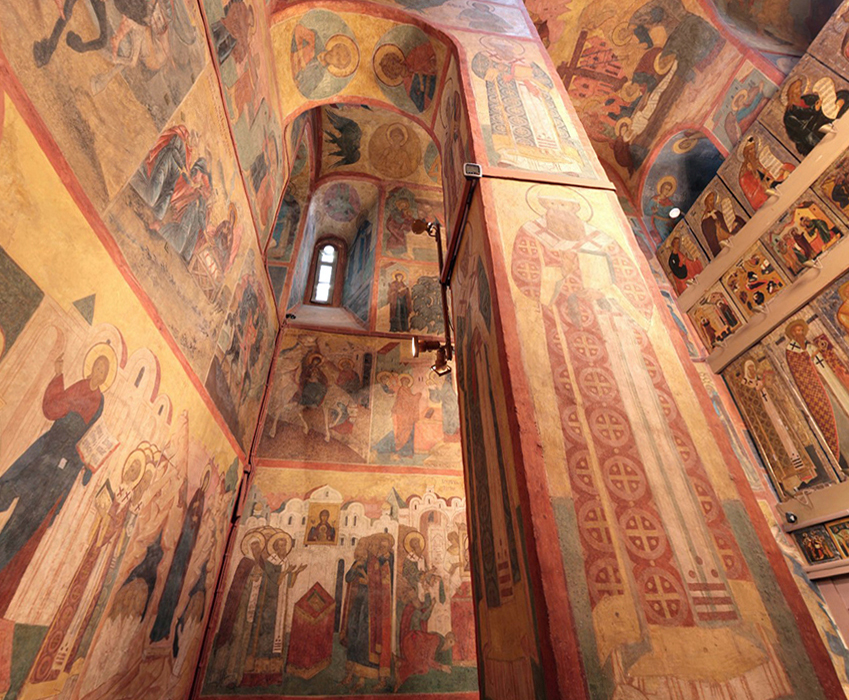 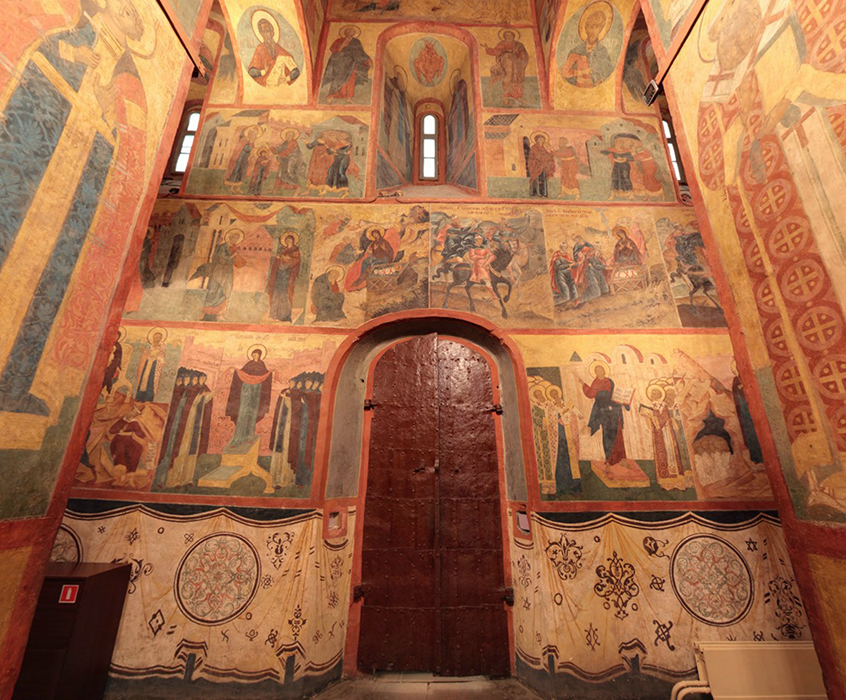 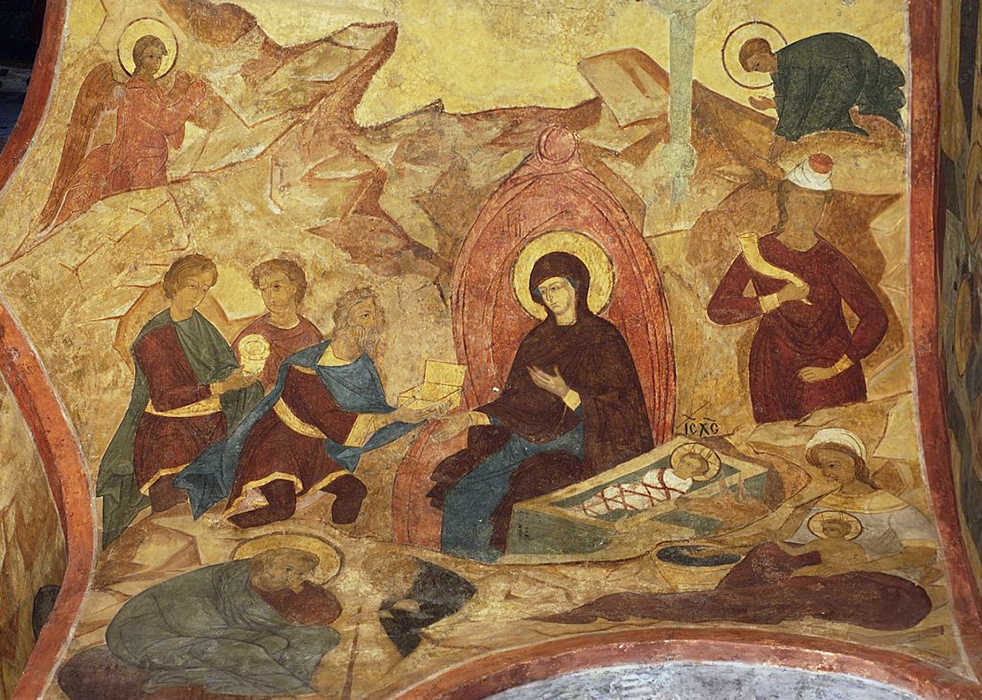 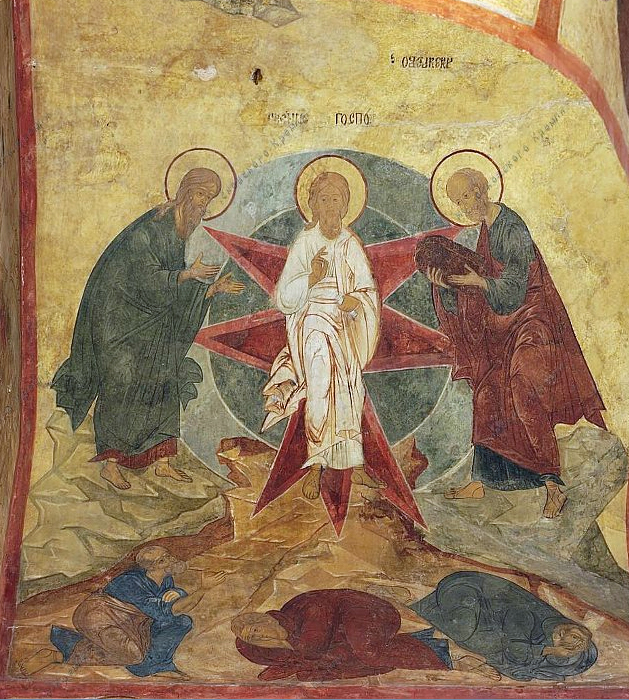 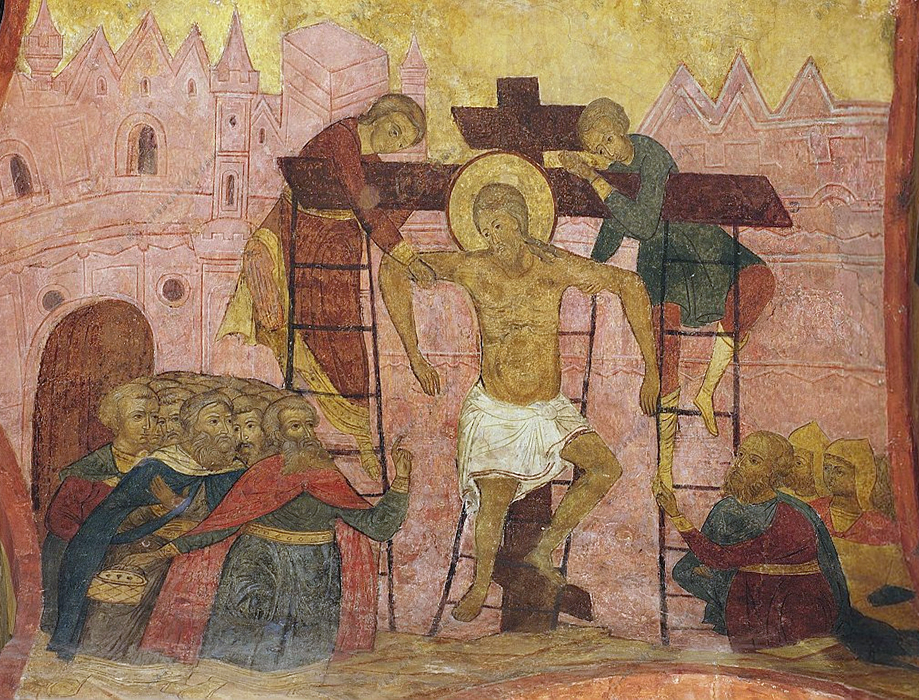 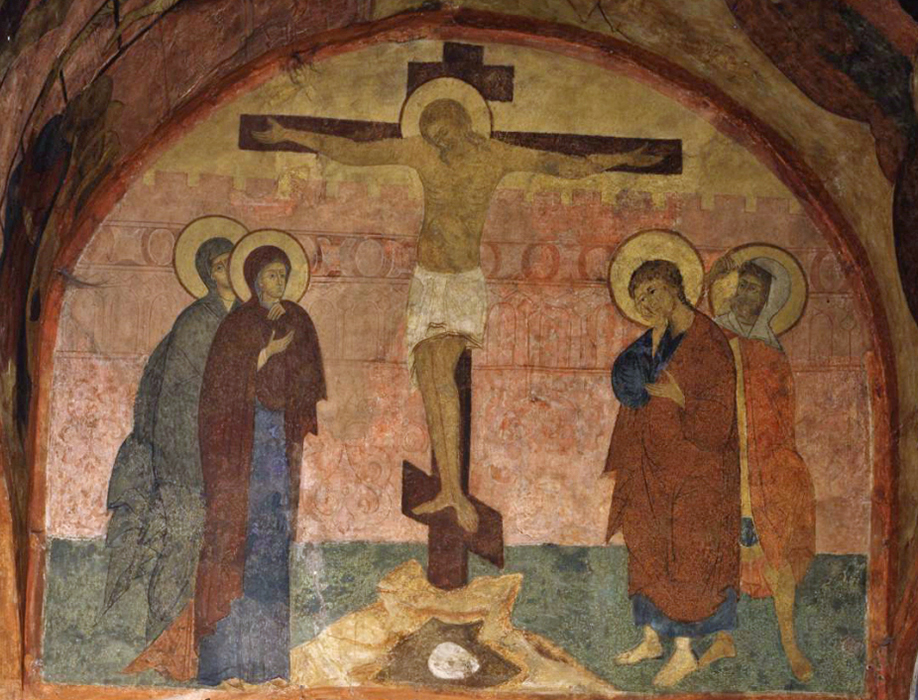 The upper part of the pillars, the arches, and the vaults bear the medallions with half-length figures of selected saints, mainly heavenly patrons of the family of the first tsar of the Romanovs—Mikhail Feodorovich, in whose time of reigning the painting was made. Window walls accommodate figures of venerable monks (saints) and heavenly powers—cherubs and seraphs.

Murals in the Chancel repeat iconographic paintings of the Assumption Cathedral, depicting a solemn composition of the Great Entrance in the central arch conch (upper part) and the composition of the Congregation of All Saints, occupying the whole apsis wall.

Large ornate frescoes of the bottom tier of the church are especially noteworthy. It’s known that this part always suffered from contacts with the prayers’ dresses, which affected the condition of the paintings. There was a tradition in Byzantium, to cover these areas with marble or to curtain with a cloth. This cloth was replaced with ornate murals with time. The bottom tier of the walls in the Church of the Deposition of the Virgin’s Robe is decorated with the bright decorative painting, imitating fabric pattern; it is called ‘towel’. The depiction really reminds of the special towel decorated with skilful embroidery. Such a lattice-like pattern can be found in Byzantium and Italian fabric of the 15th century. 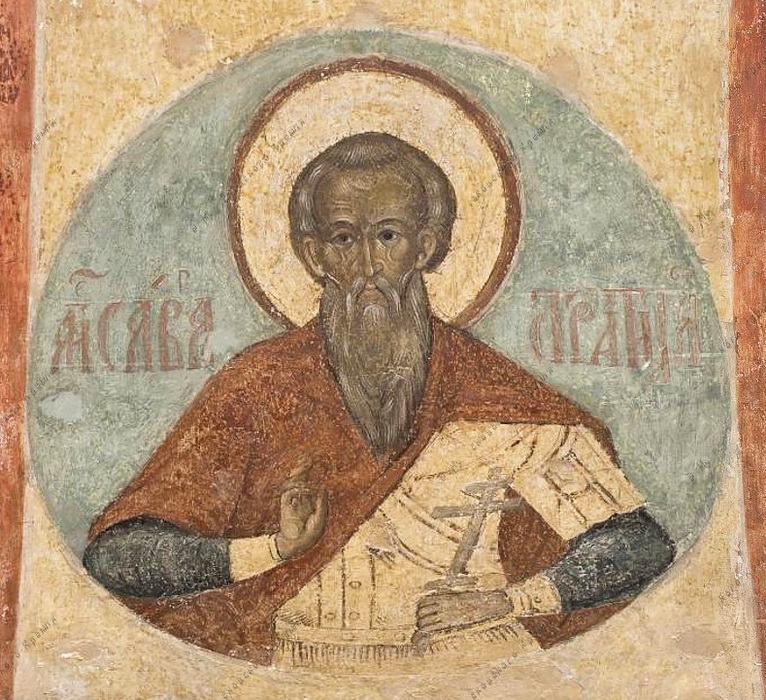 Conservation works, that took place in the 1950s, opened the frescoes of 1644, by cleaning them from the later layers and repaint, including those made by oil paint in the 19th century. The colours of the murals were most probably specified by bright and harmonious colours of the icons in the iconostasis, which had been already placed in the Church. The lightness and festive mood inside the Church of the Deposition of the Virgin’s Robe is given by the abundance of white, blue, green and cherry hues in the images of the figures, and pink, ocherous and turquoise in architectural background. The small size of the Church and the saturation of the iconography determined the dimension of the fresco compositions, which remind of small marginal scenes on icons. At the same time, the tradition of monumental painting, characteristic of the end of the 16th century, is traced in Russian art of the first half of the 17th century.

ÂÂĹĐŐ
We use cookies on our website
By continuing your visit to this site, you accept the use of cookies and other technologies to ensure the best possible use of our site and for web analytics.